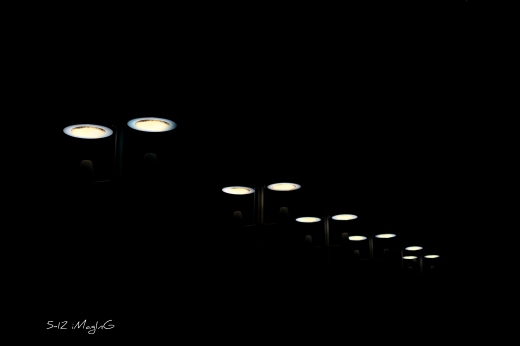 “The first virtue in a soldier is endurance of fatigue; courage is only the second virtue” ~ Napoleon Bonaparte

It’s the start of December; the end of another year. I thought I’d mark the completion of another project by now. There’s this silent tremor at the back of my mind – and it gets louder the harder I push. I fear it may be right in saying I’ve bitten off more than my mouth can hold. This new dimension could the black hole that slowly sucks the universe in; keeping me from applying myself to anything else.

My mind still traces a fence around its deepest worries as I sleep. I’d like to think it’s exactly as it was a year ago. A ton of wool weighs about the same as the ton of wood. But Maslow points to the devil is in a pile of dust. A battle of desire is clearly nothing like one for survival. How time blurs the mind’s eye.

This year has been called by many names – but 2014 was really that year for me. The one you look back on and just smile, grateful to have survived. By November, I had stopped asking what more could possibly go wrong. The best of my plans had been chewed on, spat out and marooned on an unnamed island. Every gauge was fast approaching empty: ideas, finance, patience, resolve, everything! It felt like a first-class flight to rock bottom. The once deafening ovation had now waned into a distant rumble. I had missed the perfect time to bow out. This was the next best.

With modern day production lines ceaselessly churning out synonyms, it shouldn’t be too hard to find one for a quitter. But, it’s hardly as it seems from the midst of it. Have you ever been in one of such battles? Mere participation could easily start to feel like a trophy. Some battles don’t hesitate to let one know they’re not for the winning.

Repeatedly dotting the I’s can make a pincushion of things. The foot-dragging was over; I had done the math. Time had come to take the long road back. Of what use is all the world’s grit in something that just wasn’t to be? What more could one do after trying everything? A saner, more predictable battle might be worth another swing. Not this.

Every fibre of my being was in agreement; every voice in my head. All, except one. My friend’s words always took the sting out. ‘One more push’, he’d said. I’d focused on how much I had put in and how little I had received in return. What I just couldn’t see was how close I was to victory. Amazing how a little speck can change the entire canvass.

A few days ago, it was my dad’s turn to deliver his inaugural lecture. There have been hundreds of lectures in his career; none like this. It was the academic equivalent of a builder’s capstone; the crowning glory of an academic career. As he took to the stage, I couldn’t help thinking back at the day his professorship was announced and my bro lifted him clean off the ground. An admittedly rare sight given society’s power-index peculiarities. But, dear dad couldn’t notice he was flying without a ticket. If he did, he didn’t mind. Such was the joy.

The conferment had been a while coming. There’s no telling what such anxiety does to the mind. Even worse, for things we feel we’ve earned. Questioning ourselves can make it incredibly hard to keep a smile. A rational option was to go close his career somewhere else. Everyone thought so. He’d received a number of offers too – but dear dad wasn’t having it. ‘I want it from here. I don’t want it to be a case of potential without results’, he’d say. So, he kept at it and worked as hard as he always did – often more.

It was interesting to watch his carriage in all that time. I wanted to know if the old man would throw the occasional tantrum. Would it all get to him eventually? Strangely, there was almost no sign of his travails. He even celebrated with new additions to that academic league – some of who, by my biased and unscientific reckoning, didn’t come close to his mettle. He would always return to his desk for one more hour of work. One less wink of sleep. One more pound of effort. One more review before submitting. Always one more.

The economist will tell you that, for a fixed level of production, the cost of an additional unit is typically lower than for previous units*. Simply, we’ll spend more to start than to continue in routine endeavours. It’ll take up more cost, energy, and conviction to fix lunch than to take one more bite. But, what does this say about endeavours far outside our realms of comfort? How does this help when we’re pushed to the very brink of our limits?

What does it say about how a runner would react to falling less than hallway into the race? I don’t reckon falling features as a staple component of the runner’s training. The cost of falling, should the runner choose to continue, is about the same as staring off late and carrying some extra weight. But, that’s precisely what Mo Farah did at the New York Half-Marathon. So, it was understandable that he collapsed after the finish line. It must have taken a huge mental and physical battle to finish the race. But, to have made a podium finish in spite of all that was simply unbelievable.

In a few days, it’ll be time to take stock of the past year. Many of us would have fallen short – even by personal standards. Some of those were down to personal faults we’ve identified and are working to fix. But, what of those that defy all logic? The ones that make it seem like the stars have conspired to never align. Those are the ones that make the long days seem longer and leave us questioning the point to trying.

But everyone goes through times when victory just seems impossible. No debate. For Muhammad Ali, it was m midway through the biggest fight of his career. He suddenly realized his assumptions about the opponent were totally wrong. For Mo Farah, it was the painful fall that cost him time and ravaged his body. For Danny Williams, it was having his right shoulder pop during a heavyweight title fight. It was compelling reason to quit – but each of them opted to go one more.

‘One more’ can easily be the gambler’s bane. It’s how the drunk never cures. It’s how people in abusive relationships never bolt. But, it’s also how great people survive trying times. It’s how Ali outlasted Frazier. It’s how Mo pushed his body across the line before breaking down. It’s how Danny Williams won with an injured shoulder.

The sea could be really rough right now. The night might be at its coldest and eeriest. Could be another chance has slipped and one more door just slammed shut. Giving up might even make mathematical sense. But, there’s always one more day; one more ray of hope. There might yet be a happy ending to this winding tale. But how would you know if you walk away today?

4 Responses to One More