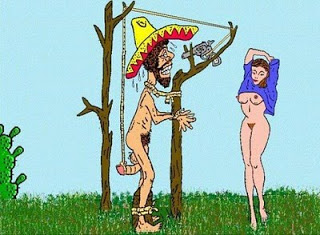 [Image Source]
“Lust’s passion will be served; it demands, it militates, it tyrannizes” – Marquis De Sade“Of all the worldly passions, lust is the most intense. All others seem to follow in its train” – Gautama Siddharta

I’m pretty convinced that by Adam’s reckoning, the only differences between him and Eve were physical; the dual-exhaust recreation centres up north and the honey-pot down south – and maybe the fact that she had a beer-independent expandable belly. Characteristically, scientists promptly swung into action to correct Adam’s obvious error. Unfortunately, however, the non-exhaustive report (which I love to call the “Interim Report”) did not see the light of day until about a zillion years after the said man’s death – due to the usual “bureaucratic delays“.

Sequel to the findings detailed in the interim report, a more specialized study was undertaken – and its facts are on the verge of global adoption. It was recently discovered that it takes a woman’s brain about twenty (20) seconds and a man’s brain only three (3) to shut down under “condition XYZ”. “Condition XYZ” has been more explicitly defined as being in visual contact with a sexually appealing “object”. This incredible (but true) finding has been dubbed “The 3-20 RULE”.

Putting things in perspective, what this means is that when the average man spots a “hot” creature, his brain (assuming it’s a super-fast one) has just enough time to raise one question, conjure a response, ask another question before hurriedly shutting down. A response to the second question is usually filed by the brain under the “long-thing” section. In my experience, (you can forget I said that, but …) the usual order is: “Is it a girl?”, “Yes”, “Is there a bed around?”, “OUTAGE WARNING”, “OUTAGGGEE WAAAARRRRRNNNNIIIII”. Tewhn! Power out! He suddenly propels into the rocket age (that’s the one after the jet age) and invents, in his head, a device for viewing clothed people totally naked. (for some strange reason, this device only works on women) He would do and say anything at this point to make it happen – it’s not strange to hear a semi-literate guy claim to have single-handedly resolved the dispute between Iran and the U.S. in such modes.

For the female folk, here’s how it goes: Twenty whole seconds! Damn! That’s like a unicorn’s eternity! In a characteristic manner, the first four seconds are wasted in asserting that their huge shades (and/or contacts) have not helped improved the target’s lot. Then, a lot of Q&A-ing can happen in sixteen seconds – provided, of course, that the answers come from the same mind asking the questions – she asks, she answers! And, here was I thinking lust was a masculine thing – like testosterone (and his many cousins) – until a cutie set me straight (details CLASSIFIED). Now, I know much better.

This brings us to the fragile “must-cross“ bridge: Forget the fact that El hermano (the dude in the pic) is a superhero who finds women as much a bother as superman finds kryptonite – though, something always bails him out of the impending crap-storm. If a real dude is trying to stay off sex, …… (maybe that doesn’t really sound popular so let’s re-phrase it). If the average guy happened to be in El Hermano’s place, how would he stay alive long enough to achieve his five-year dreams? Or, if by some off-the-chart Jackie-Chan and John-Woo stunt, El Hermano and El Hermana switched roles (she might not find him appealing at all; but still…), will she live beyond twenty seconds?

I’ve been told that the unicorn-equivalent of three seconds is like five years. So, the male unicorn (AKA El Unicornino) will definitely find escaping from the contraption much easier. He’ll simply shout to the executioner, in their irritatingly slow language, “But she’s a bloody unicorn! Unicorns aren’t real. Gotcha!!!” – and somehow hope his horn can jam the bullet within the gun’s barrel. Hun hun! That trick doesn’t work for us humans. Please stop thinking closing your eyes will save you – it only makes things worse!

Lemme know if you’ve got a plan that really works. You just might save a soul!

Somewhere between 6' Tall and 6' under